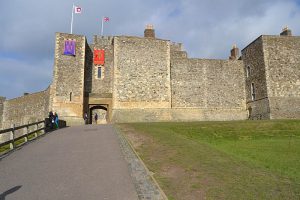 A huge group of 21 young people battled through the wind to reach their exploring destination - Dover Castle! The weather wasn't going to hold them back - they were ready for an underground adventure!

The young people walked around the underground tunnels, seeing what it would have been like many years ago. “I really enjoyed walking around the tunnels, they went in all different ways! I didn't know that people would have hidden in the tunnels too!” said Shannon, and Michael said, “I liked going through those funny tunnels in the castle and seeing where they went.”

Some young people then headed off to the Castle and had the opportunity to see what it was like to be a King or Queen! They enjoying exploring the rooms and going through some unusual walkways to see what room it lead to next.

"It’s massive here; the rooms are soooo big!” said Lewis. The young people took turns to sit upon the throne and pretend to be the King or Queen! They also learnt some history of the Castle and the people that lived there too.

Once the exploring came to an end, it was time to head to our minibus for some lunch and birthday celebrations followed by playing in the park before heading home.

“Thanks for the birthday card and doughnuts. It was really nice to have my birthday with everyone” Liam