17 lucky young people joined YLF for ‘The Flight of Dreams’; boarding a Thomas Cook Aeroplane and searching the skies for Santa Claus!

Excitedly the group arrived at Stansted Airport and were greeted by some of Santa’s Elves who really needed help to search for Santa!

The group boarded the plane and the plane’s engines let out a massive roar and at the same time so did almost everyone else on the plane – through the sheer excitement of the take-off! For many this was the first time they had ever been on an aeroplane! There were a few screams and lots of smiles with one young person in our group shouting ‘WOOOOW, this is AMAZING!!!’

Above the clouds Christmas carols began and the Control Tower informed us to keep an eye out for a sleigh-shaped object in the sky!

Suddenly, as if by magic, Santa made his way inside the plane saying hello to all the children on the plane. Everyone was smiling and having a fantastic time!

As the plane starting descending, all of the children started shouting and screaming with excitement - one of our young people shouted ‘Yes, we made it… and we didn’t die!’ – much to the amusement of his fellow passengers. 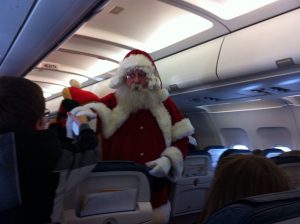 The young people were escorted back to the airport entrance and much to their amazement there was Santa Claus giving out gifts to all of the young people.

One young person left saying ‘I’m so happy that I got to give Santa my letter and he read it with me. Today has been great!’.

YLF is grateful for the support of Thomas Cook Children's Charity, giving our young people the chance to experience such an exciting and magical day with Santa!

Read more about our Flights of Dreams!