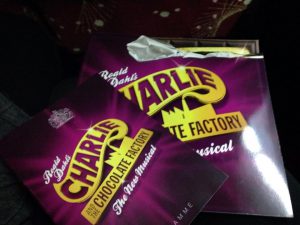 YLF ventured into London’s West End yesterday with 30 young people to see the theatre performance of Charlie and the Chocolate Factory.

The young people were fortunate enough to experience such an exciting trip as a result of fundraised money. They were accompanied by their volunteer mentors and independent visitors on a day of magic and wonder!

The adventure started with a coach ride up to London, and with 50 people on board the coach was bursting with excitement, giggles and outbursts of the ‘umpa-lumpa’ song!

The atmosphere calmed once we hit the outskirts of London, with the clicking of cameras and phones taking pictures of landmarks, followed by ‘Ah look!’ and ‘Wow, that’s awesome’. There was a buzz of awe on the coach, with the young people asking their volunteers questions about landmarks and the history of London, with squeals of ‘There’s Big Ben’, ‘There’s the London Eye’, ‘Is that the Thames?’ or ‘Who is that statue of?’

After a small detour around Trafalgar Square we arrived at our destination.

In the auditorium you could feel the excitement growing as they prepare for their first-time experience.  Once seated the noise of giggling young people evaporated into an array of smiling faces glued to the stage. The young people thought the performance was ‘amazing’ and the umpa lumpas certainly provided everyone with the medicine of sheer laughter and joy!

On the return journey home the young people were full of high spirits after receiving YLF's gift of a 'Wonka' bar and they were all talking about which bits they liked the most. Chloe said, ‘It was really cool, when the girl got big. That was really funny.’  The young people were so impressed and Kyle even asked, ‘Can we go again?’

YLF are so delighted to be able to give the young people and their volunteers this experience. The ice between newly matched children and volunteers was certainly broken and it allowed other friendships to grow more strongly. The day may have flown by, but we are sure the memory will last a lifetime especially for those young people who had never visited a theatre nor seen London either!

"I had the best day ever - I will never forget the Umpa Lumpa's, they were amazing!" Jamie