"Today was well 'sick'", said Jamie, aged 14. What a way to sum up a thoroughly enjoyable day paintballing!

Yesterday, 15 young people had a chance to join in at the paintball challenge event in Saltwood, Hythe; funded through donations to YLF. This provided them the opportunity to spend time with other young people in care and make new friends. Nine of the young people had never been paintballing before, bringing to them a whole new experience! 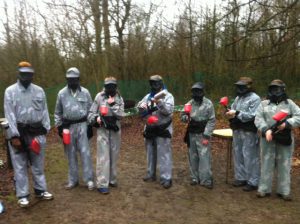 The young people were divided into two teams, played many different games and tried to achieve different objectives each time. The groups worked so well in their teams and even planned strategies on how best to work together in an attempt to win! They all helped each other out and supported each other throughout the day; one young person covering his teams back whilst they reloaded their paintball guns, helping each other to climb up and down the muddy banks, or just having good conversation and sharing stories.

One of the funniest moments had to be the 'tin can challenge' - the two teams had to get to the middle and collect the teams can. A young person from one team found the opponents can within their area and tried to pretend it was their own. After skidding around in the mud whilst running with the can, trying not to get shot with paintballs, he was caught out and decided to give up trying to bend the rules and instead went back to playing fair - good effort though! :)

“Today has been great, I have never been paintballing before but I really enjoyed it”. Pamela aged 14