I think it was back in November when I saw the YLF email asking if anyone was interested in running the London Marathon for our wonderful charity.

Having already applied in the ballot and missing out, I must have replied within 0.5 of a second letting Janine know I’ve done a bit of running over last 3 years, including Edinburgh and Brighton Marathons, alongside a dozen or so Half’s. I played it cool, knowing others had applied, but secretly was desperate to be given the nod...

When it came, I was so thrilled – for me, the ultimate event I could possibly participate in – thank you YLF.

I had a good level of basic running fitness, but this now signalled the beginning of the dreaded Sunday Long Run routines, running 10 to 22 miles every week, in the dark UK winter months, often at 6am start times (meaning up at 5am for breakfast fuelling).

My journey to London took me from Deal, to Rome, to Maidstone in terms of Half Marathons, not to mention cross country trail events in Sussex and the awesome Christmas Turkey Run in Maidstone. Topped up with almost constant attendance at Maidstone parkrun, and the formation of our Bacon Butty Brigade running club to keep ourselves motivated (motto: Run, Stop, Eat Bacon), plus Monday and Friday evening Sweatshop runs

The week leading up to the big day seemed like a month. No strenuous runs allowed, just relax, and carb load. The EXPO was superb and filled us with anticipation of what was only a few days away,

Saturday had me climbing the walls, packing, trying all my race day gear on again, re-packing, eating pasta and going to bed at 9pm for a broken night’s sleep.

...alarm at 4.30am, porridge, toast, tea, in the car at 6am, picked up my running buddy Chris, off to Abbeywood, train to Maze Hill, and there we were – in Blackheath Park before 8am!

9.15am – bags loaded onto our lorry, and we entered our race pen.

This is my favourite part of any race – penned in with other nervous, excited runners, making new friends, sharing stories whilst the clock slowly ticks down. I met a wonderful lady who had experienced four miscarriages, running for a charity that has supported her through the years. It’s hard not to blub when meeting such amazing people.

...Major Tim Peake counted us down from the Space Station, and we slowly shuffled towards the start line.

Our plan was to run it in 4 hrs 20 mins, hitting a constant 6.15 mins per KM pace. We were surprised to find that once we crossed the line at 10.16am, we were able to get straight into this pace, and were not hampered by the thousands of runners around us slowing us down.

I wrongly thought the first 5 miles would be uninspiring – how wrong I was. It was an immediate sign of what was to come – 26 miles of frenzied support. Awe inspiring.

I read an American runners blog today, saying that any reputation Brits have for being shy and reserved are totally undeserved...

...there was probably 100,000 people along the route, and those guys rocked our worlds. Names being shouted, high fives, drinks, sweets, it was so humbling. We felt like we were having our 15 minutes of fame, and after all their efforts on a cold day, the least we could do was run!

Then at 3 miles, by sheer fluke, I ran within a metre of my family who were in a place I wasn’t expecting. The rush of that chance meeting propelled me to the Cutty Sark, where the noise levels rose even higher, and then on to Tower Bridge, where it was deafening.

At mile 15, running through a tunnel, for some reason I decided to look up at the people 50 feet above me – and there were my family again! Then I saw them at 18 miles, such a welcome boost when you are starting to run out of energy.

I can’t say I hit the wall - I was treating myself to energy gels, jelly beans, and Bounty Bars every 5 miles, so this kept me going.

The race really starts at 20 miles however – your body has spent all its energy, so then it’s all down to determination, and running for your personal cause – having been involved with fostering and now advocacy, the brave young people we all try to help kept me moving to the finish line.

Those last 6 miles seem like another 20. The crowds however know this, and scream you home. Mile 25, The Mall in sight, the finish behind the fountain, and suddenly it was over. Chris and I crossed the line together, having ran toe-for-toe the whole way round (having prior agreed we wouldn't do this !!) – in 4 hours 24 mins, a time we were both pleased with.

Medal, photos, goody bag, pick up your kit bag from the lorry, and stagger to the meeting points on seized up legs and with stomach cramps from the high energy garbage consumed for the 4 hours prior – I’d forgotten the difficulties of stopping running, and was being over ambitious in prior plans to go out for a few beers after. Home beckoned, we hobbled to the train and got home around 7.30pm, what a day!

One of the best experiences and days of my life, my ears were ringing from the noise for the whole of the following day. 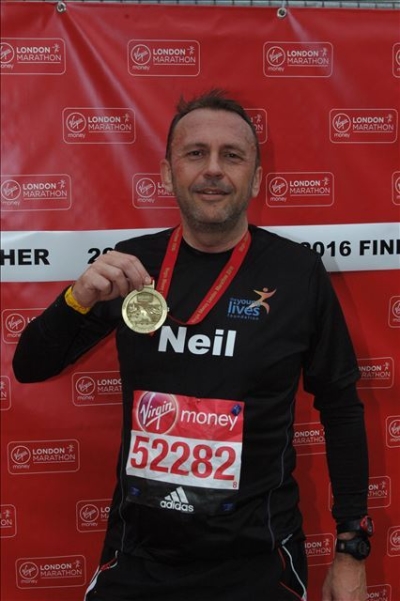 The bleeding nipples, lost toenail, blood-in-wee, blisters, calf injury, sleep deprivation, dieting and alcohol avoidance were all worth it – if you've ever thought you would do it one day, DO IT NOW.
Be one of the 1% of people to do a marathon.