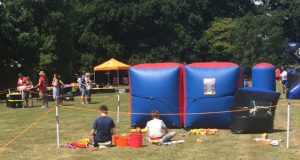 The sun shone for us at our annual BBQ which was held for our volunteers and their young people. With thanks once again to our President, Clive Emson and his family for allowing us the use of their beautiful grounds.

As always the Megablaster Nerf Guns were popular with everyone, especially the shooting target range where eager contestants were trying to win the top prize of a Nerf Gun.

Inspiration from Wimbledon and the World Cup finals on the same day gave budding young people a chance to practise their own sporting skills as well as trying their hand at badminton and croquet.

Regulars and newbies to the afternoon’s fun also enjoyed the BBQ which was cooked and served by staff and volunteers; and then taking shade under the trees to sit and relax, get to know each other and cool down with one or two ice creams.

Having a dip in the pool was essential on such a hot day and even Sandro, our Participation Support Worker joined in, although he was fully clothed (perhaps this was not intentional!!).

A big thank you to everyone involved especially our volunteers who continually give their time in bringing young people from across Kent and Medway together for such an enjoyable afternoon.